I make a home, in my home, for working from home.

Last year, after working from home for 2 years due to the pandemic, I decided it was time figure out a longer term office/workshop solution. I had bounced around in various bedrooms and even the dining room table, but none of those locations were going to work for the long haul. So I decided to convert most of a utility room under the house to a workshop and office. I didn't envision anything fancy. Just a flat, level floor, a better workbench, and room for my desk and chair. I am not particularly handy, and normally we pay professionals to do any work on the house so that hopefully it gets done right. But this room was just serving as storage and the location of our furnace and hot water heater. No one used it for anything, so no one would care if it continued to be unusable, even months if that's what it took. 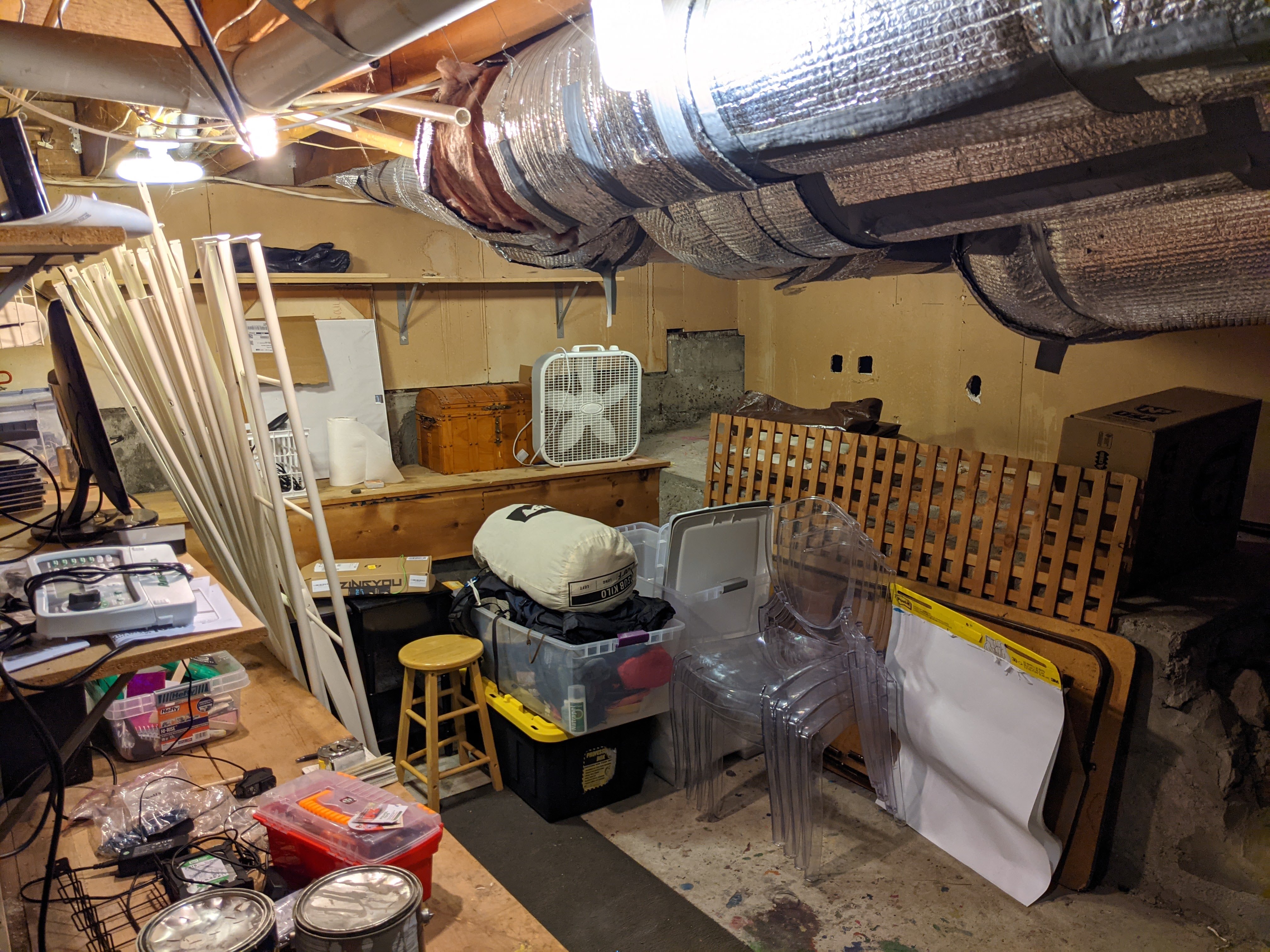 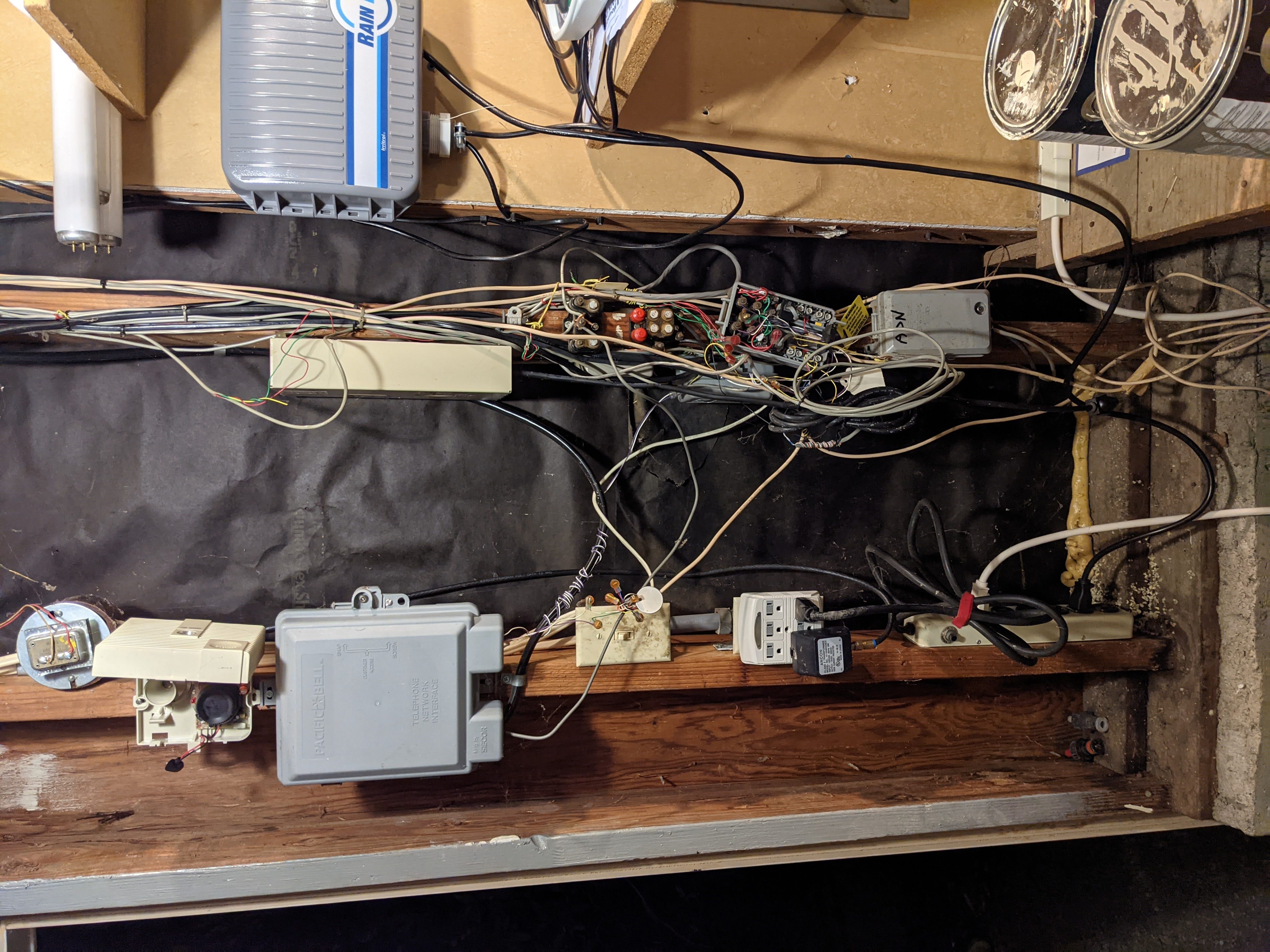 The room was a mess, just full of stuff. It's not entirely underground, like a basement, but partially underground because the house is on a hillside. It already had a roughly poured "tub like" space. The bottom of the tub was uneven and not level, so I knew I would want something smooth, flat, and level for my rolling desk chair.

The previous owners were early adopters on solar and DSL. The low voltage wiring for things like the doorbell, phone lines, and CAT-5 were strewn all over the place. There were several land line phone related wiring harnesses and boxes that I never did determine what they were. Luckily we had already removed the old lead/acid batteries and inverter when replacing the photovoltaic system a couple of years ago.

Since the furnace is in this room, all of the ducts leading to the rest of the house start here. The ceiling is already pretty low and I was certainly not going to dig out the existing concrete to get any more height. I'd just have to live with it even though I'm over 6 feet tall. Most of the space would have close to 8 feet of height, and I'd put my desk under the most of the ducts since I wouldn't be standing where it was. Even so, it would be important to lose as little height leveling the floor as I could manage.

Nothing was going to happen without getting some or most of the junk out of that room. Through a combination of donation, second hand sales, and a trip to the dump, I managed to get it cleared out enough that I could see what I was working with. It was at this point that I really knew I wanted to tear out the existing drywall and work bench. I would want some more outlets, and the working surfaces were uneven, too low, and not particularly strong.

Like I mentioned, the challenge was to get level and flat, without losing too much height. Since I would be working on top of existing concrete, one option is to use wood "sleepers" and then put a plywood deck. The floor didn't vary by more than a couple of inches at worst, and I didn't think I could rip sleepers and cover with plywood without losing at least 4 to 5 inches, so I decided on self leveling compound. 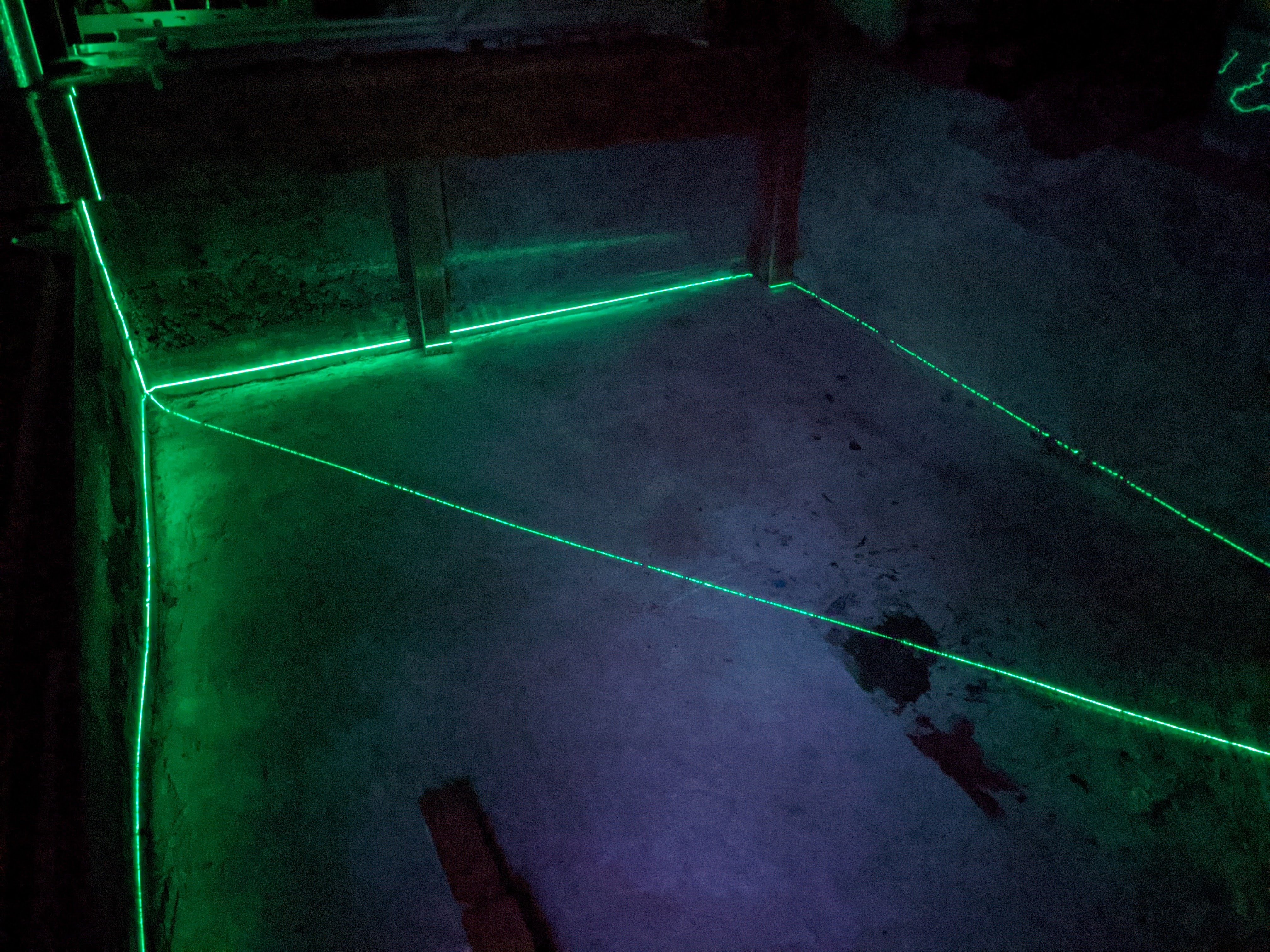 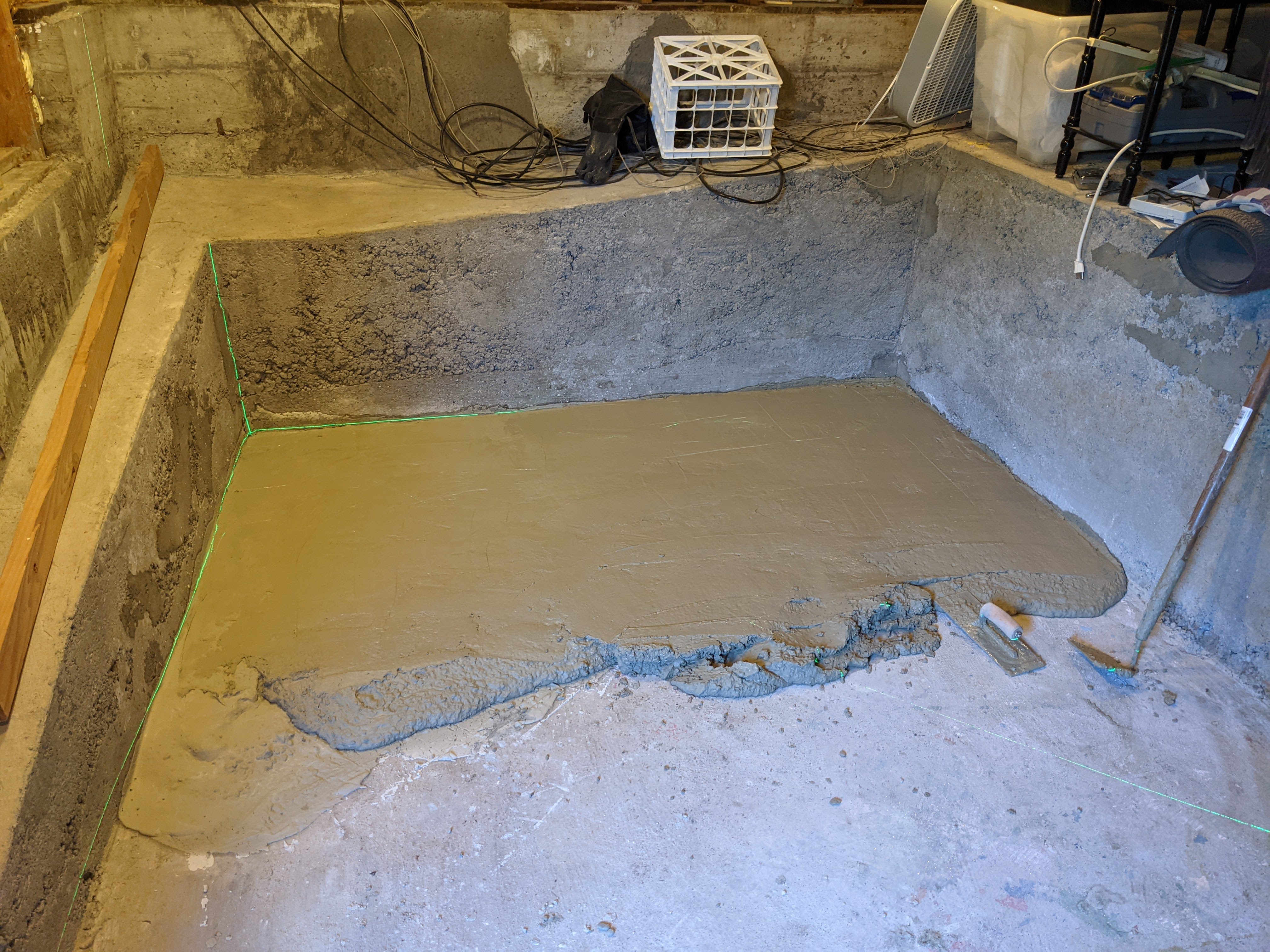 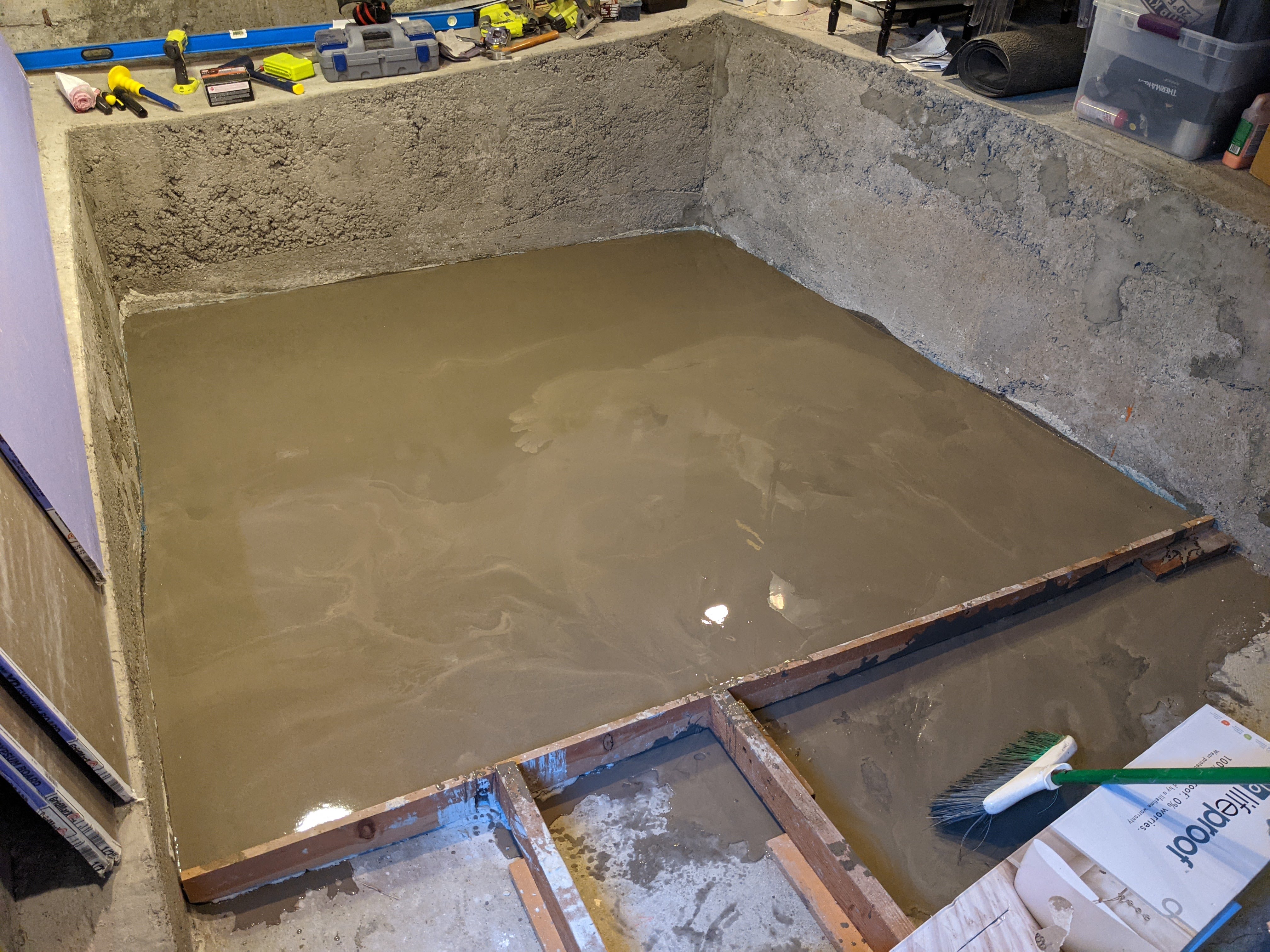 Self leveling compound is good for finishing touches, but it is far too expensive and impractical for some of the depths I would need. So I used a laser level to see how far I'd need to bring up the low spots to the highest spot, and mostly filled in with concrete first. The self leveling compound was just the icing on the cake, so to speak. I'm really happy with how this turned out and I couldn't have done it without the help of two friends who mixed and poured with me one Saturday! It almost feels like a shame to cover it up, the surface of the finished product was that nice.

I planned to basically frame around the concrete tub, enclosing it in 2x4's with sanded plywood tops. I built each of the "walls" and the worktop as rectangles and then assembled them all together. Using 2x4's and 1/2" plywood may have been a bit overkill, but the results are pretty beefy and really useful. 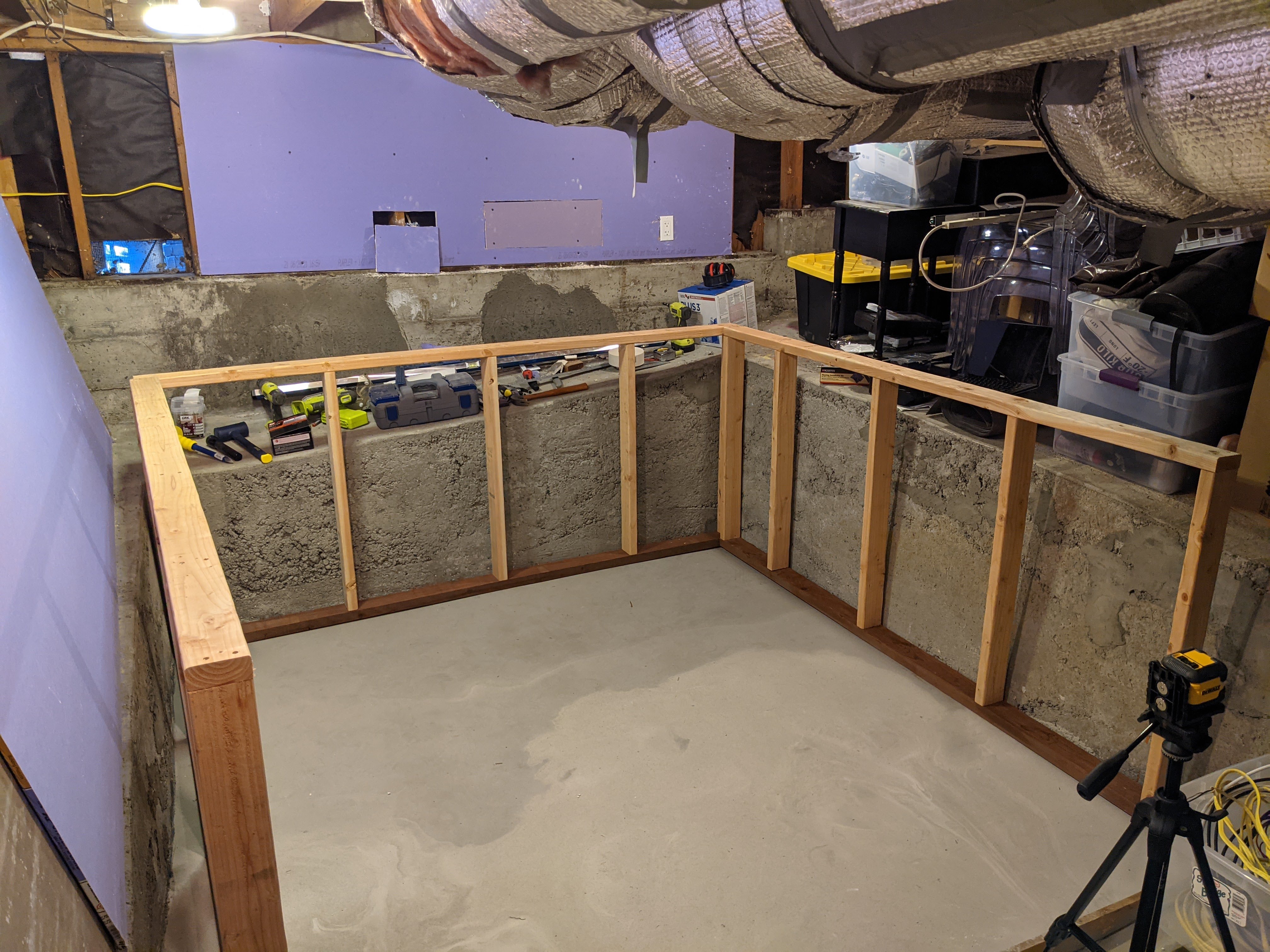 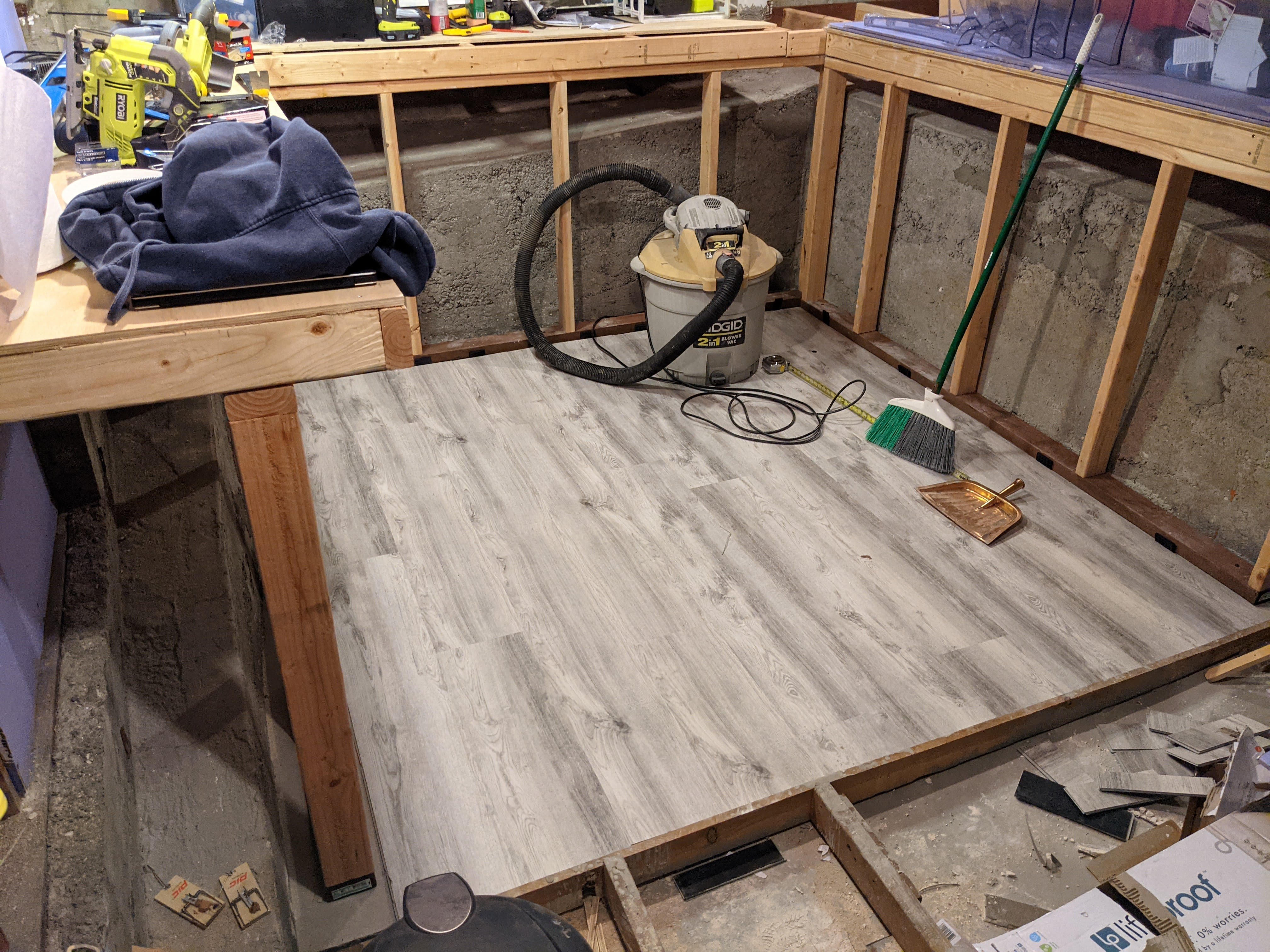 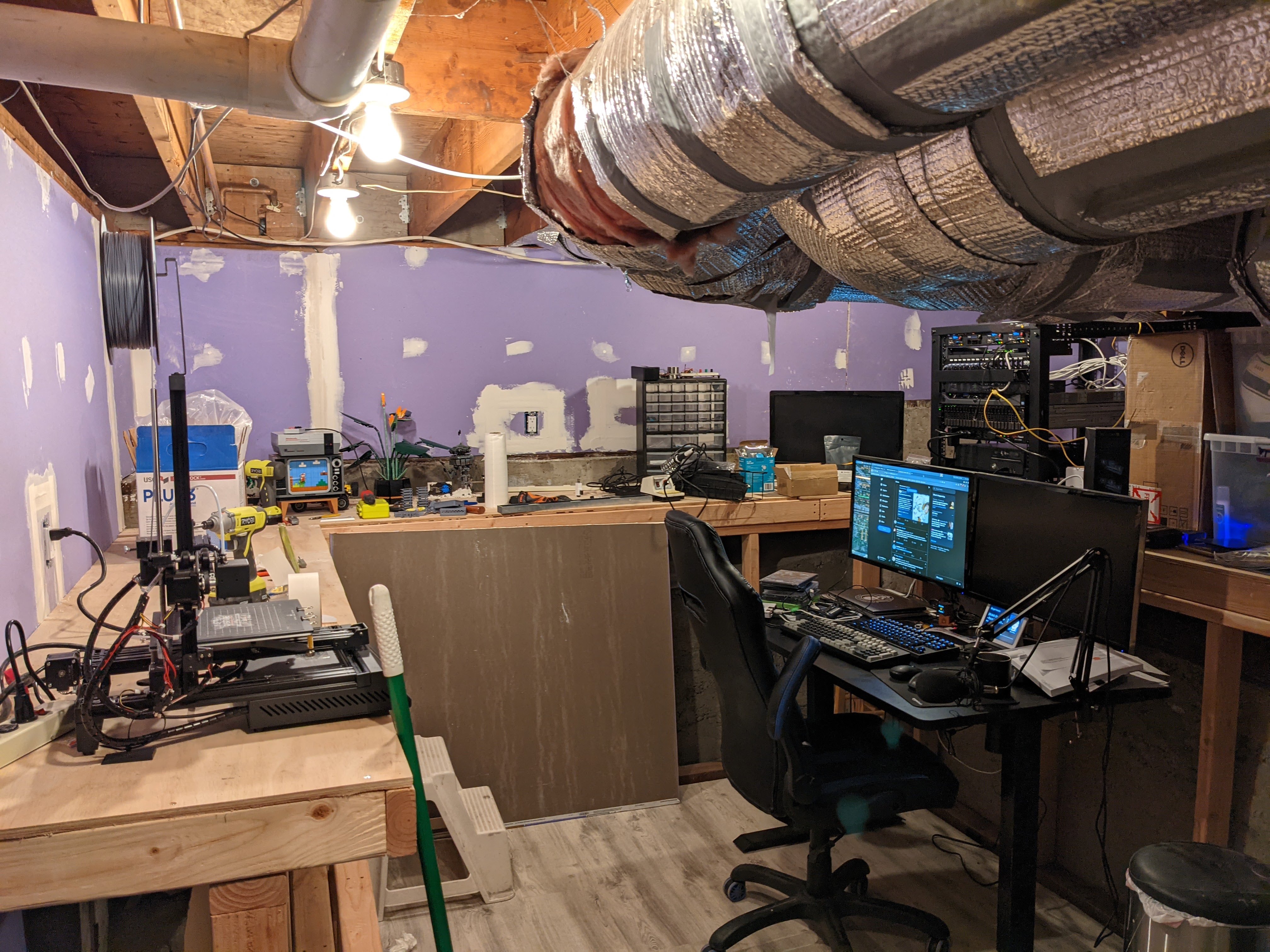 I replaced the existing drywall, which was in pretty poor shape, with moisture resistant drywall. Taking off the old material allowed me to add a couple of outlets to the existing circuit so that I have two walls with outlets built in. After this ordeal I'm definitely no fan of working with drywall. It's partly because of that that I've not sanded or painted the walls. 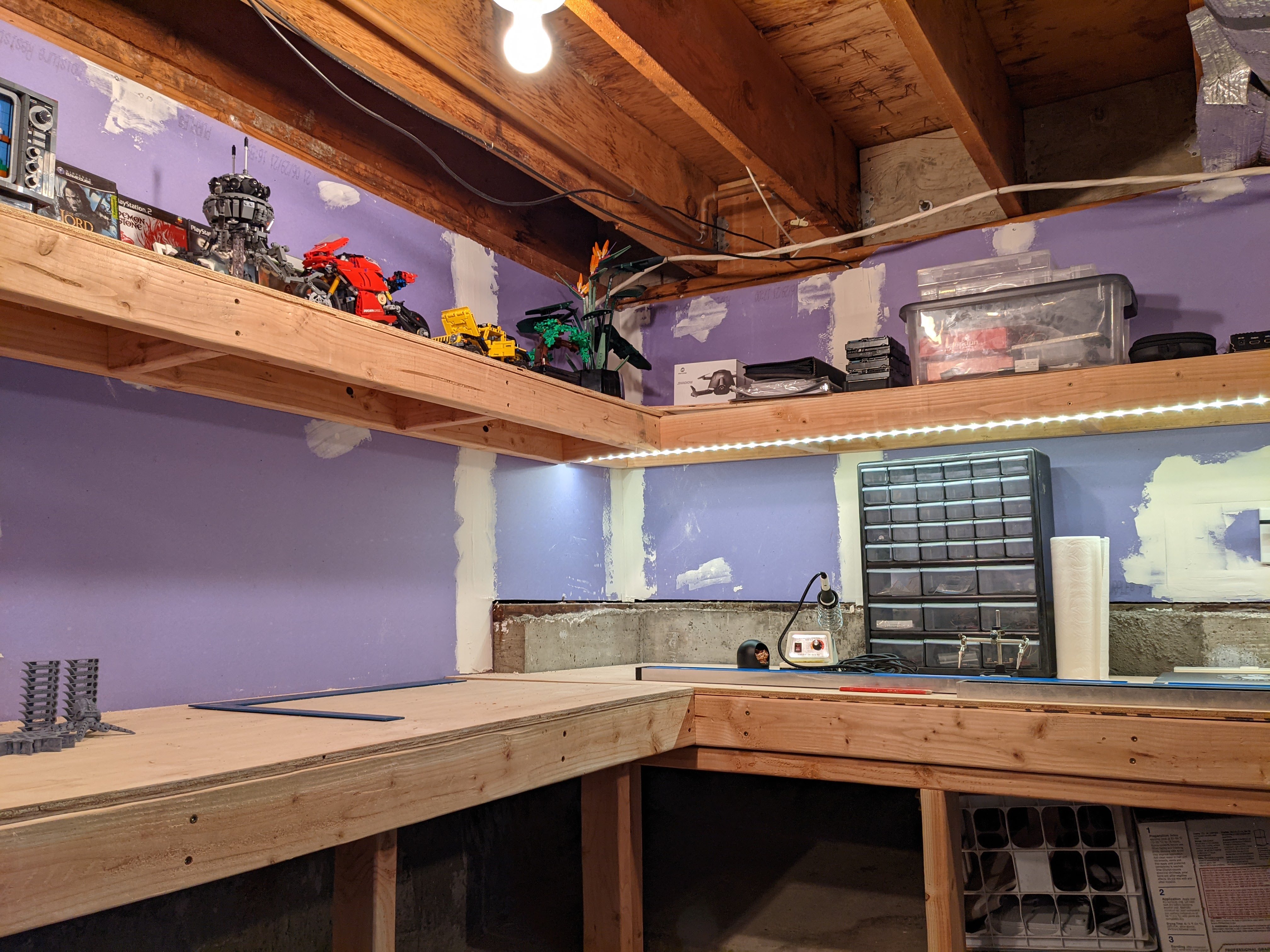 The shelves are simple floating shelves made with 2x4s lag bolted to the studs and finished topped with sanded plywood, like the workbench. They don't hold anything heavy, just some hobby stuff and Lego.

I'm very happy with my results for now. I hated doing the drywall but met my goals and moved in to work as soon as I could. This means the walls are not finished nor painted, but it has a very utilitarian vibe so that's fine by me. I've been working down in the workshop since last year and it has afforded me a great space and focus time. I've even built out a home lab!