Read: Cult of the Dead Cow

I've been interested in hacking for quite some time, but never spent any time getting in to it. I distinctly remember seeing the cover of Wire magazine back in '94 and diving right in to the article. 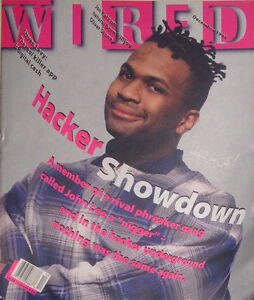 I'd been on BBS's from the 300bps modem days via an Apple 2GS and had my share of racking up long distance phone bills dialing in to neighboring cities' boards where there was actually an audience and "content" of a sort. Door games1, a gateway to news groups, FidoNet etc. At some point someone got a hold of the login and password for a local research extension of Cornell University, from where you could reach the Internet for real. There were a couple of BBSs started by high school classmates that were a great waste of time as well.

In college I built a red box, a friend built a red box, we built a couple red boxes and sold them. Then I realized I didn't like talking on the phone anyway and my long distance girlfriend had broken it off so there wasn't much point. Probably for the best.

Lately I've been very interested in Information Security, and especially responsible disclosure, white hats, and getting paid for finding and disclosing vulnerabilities. I don't have time or skill to do it full time, but it's a fun hobby for now.

So it is with that background that I was interested in reading the Cult of the Dead Cow2.

"they handed over a Chipotle bag with $20,000 in cash inside. When Adam asked if they needed a receipt, they just laughed. “Not for anything less than a hundred K,” one said."

I liked this book quite a bit, it would probably be a little dry for people lacking an intrinsic interest in the topic and people, but I think that Menn did a great job. The personalities, politics, pranks, all of it reads like a parallel world where loose canons and calculating technologists roam the landscape. If you've ever wanted to know a little bit more about some of the big names in Information Security, or to know the real names behind some of the (in)famous handles, this book is for you.